{Movie} Review: After the Dark 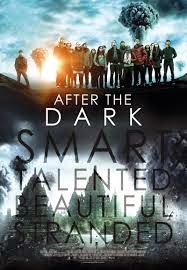 When the last day of school comes for a group of students in a philosophy class, their instructor, Mr. Zimit, challenges them to different sorts of exercises that take place in a post-nuclear apocalyptic world. While there, they each get chosen professions and have to decide whether who is valuable or not because the bunker they will be staying in for a year has only enough oxygen for 10 people. Mr. Zimit challenges them in different rounds to see how they could survive. Issues arise when they notice Mr. Zimit is disruptive to the game.

My thoughts:
We watched this movie last night and I have to admit that I would not make a good philosophy student. Even though the questions and scenarios were all hypothetical, I really hated Mr Zimit for even the suggestions he made.  I take things way to personally and I am sure I would have felt like some of the students in the class did.

It was fun watching the three games - in the first game, the students were given professions only;   anything from an opera singer to an engineer.  In the second, there was something extra added.  The opera singer could speak 7 languages but would die of throat cancer in three years for example.  That made the choices much harder to determine who would enter the bunker and who would not - the existence of the human race is at stake after all.

The final game was led by one of the students making all the choices.  In this game, I had a bit of an issue with the storyline that went off track a bit - only one point did not make sense for me.  But it is just a movie, so I could overlook it to enjoy the story until the end.

It was an enjoyable movie but I would recommend.  Just remember this is fiction!