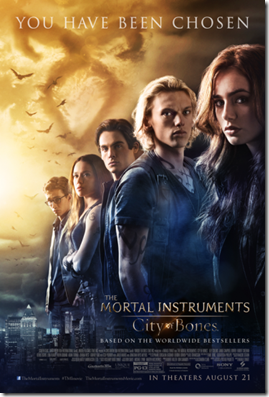 Set in contemporary New York City, a seemingly ordinary teenager, Clary Fray (Lily Collins), discovers she is the descendant of a line of Shadowhunters, a secret cadre of young half-angel warriors locked in an ancient battle to protect our world from demons. After the disappearance of her mother (Lena Headey), Clary must join forces with a group of Shadowhunters, who introduce her to a dangerous alternate New York called Downworld, filled with demons, warlocks, vampires, werewolves and other deadly creatures. Based on the worldwide best-selling book series.

My thoughts:
I have not read the Mortal Instruments books and at first I had no interest in seeing the movie but when your choices are limited . . .
So I wasted a few hours.  And against my better judgment, I enjoyed it.  I don’t usually enjoy fantasy movies (I love fantasy books but not movies) but I was immediately drawn to the lead character, Clary.

Everyone knows what the story/series is about, so I won’t say more than the blurb above.  The acting is not brilliant but the cinematography is beautiful and there are some amazing special effects.  Clary and Jace are both beautiful people (as are their co-stars my bookish friends pointed out).   So there is a lot of eye candy both in the world and the people.

Just don’t expect too much and open your mind to some mindless fun.  This is the perfect cold weather movie.