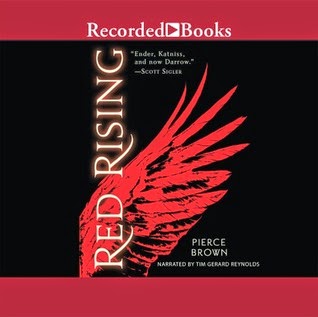 
The Earth is dying. Darrow is a Red, a miner in the interior of Mars. His mission is to extract enough precious elements to one day tame the surface of the planet and allow humans to live on it. The Reds are humanity's last hope. Or so it appears, until the day Darrow discovers it's all a lie. That Mars has been habitable - and inhabited - for generations, by a class of people calling themselves the Golds. A class of people who look down on Darrow and his fellows as slave labour, to be exploited and worked to death without a second thought. Until the day that Darrow, with the help of a mysterious group of rebels, disguises himself as a Gold and infiltrates their command school, intent on taking down his oppressors from the inside. But the command school is a battlefield - and Darrow isn't the only student with an agenda.

My thoughts:
I first saw this book on BookTube (a new addiction which my bandwidth hates) where most reviews raved about it.  I could not wait to pick it up and the first few hours were wonderful.  I enjoyed the world building of the Reds living underground on Mars.  The characters were interesting and flawed. Unfortunately this was not what the story was really about and I was soon bored.

When Darrow infiltrates the Gold's world, the story changes.  In some parts I found my mind wandering and I had to consciously remind myself to get my head back into the story.  The story becomes one of the "dime-a-dozen" young adult books where the main character is prettier and smarter than most.  He (or she) is thrown into a "school type setting" where he has to fight his classmates (to the death for the most part) for the top winner position.  As in most dystopian young adult fiction there are lots of fighting, cruelty and death.  Not my favourite characteristics of young adult books although I love dystopian/technology advanced worlds.

And then there is Darrow. . . I disliked Darrow.  I mean I really disliked him which is a problem as he is our main protagonist.  He claimed an undying love for his wife, Eo in the first few chapters of the book but this was very easily forgotten when he was immersed in the Gold's world.  I also felt that he was a bit too comfortable in this new life and conveniently seems to forget what the true purpose of his presence is.

I loved the narration by Tim Gerard Reynolds.  I really enjoyed his calm voice which starts with a vague Irish accent for the Reds and turns British-ish for the Golds.

I am in the minority with my thoughts above as the reviews on Goodreads almost all screams praise of this book. So you might have to read it for yourself to see . . .
Posted by Unknown at 2:17 PM